Dissent in Enemy of the State

A FRESH LOOK AT FILM, TELEVISION, AND EMERGING PLATFORMS

Note: Although this film is 72 years old, I am not going to assume that everyone reading this has seen the film. For that reason, the fates of these characters will be alluded to, but not fully revealed. The plot will be discussed to the detail that the themes will require. That all being said, you have been warned.

Ronald Reagan’s filmography is something that the current generation are more than likely aware of, but have never explored to great depth. His career as president of the nation is more familiar to us, but it is worth reminding ourselves that he was an actor, and president of the Screen Actors’ Guild, first. The 1940’s is without a doubt one of the best decades for American cinema, and 1947 in particular holds a lot of favorites from the era. There’s a complexity to these films that makes them worth revisiting so many years later, and That Hagen Girl is no different. At the time of release, the response towards the film was quite harsh, and whilst it is a classically melodramatic Hollywood affair, it is an extremely entertaining watch, with notably relevant ideas. 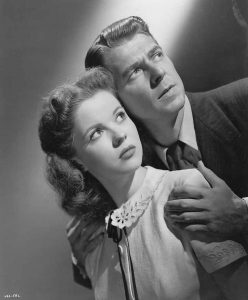 Welcome to Jordan, Ohio (Smalltown, USA); a wonderful place where the only way you can pass the time is by assuming the worst in your neighbor, and then talking to everyone else about it. The latest story gossip around town is that a woman, Grace Gately, is having the illegitimate child of lawyer Tom Bates (our guy Ron). Whilst the two have been seeing each other socially, he is forbidden to see Grace by her family, and unable to make peace with her and set the record straight. Unfortunately, the word around town becomes so toxic that the truth would not even be believed. Tom can’t even go to the drugstore without someone picking a fight with him about the matter, and thus his mentor, Judge Merrivale, arranges for Tom to take a case out of town so that he may continue his work and try again in a new community. Tom returns years later, the child has grown up under the name Mary Hagen (Shirley Temple), Grace has passed away and so has the Judge, leaving him to take over the Merrivale practice.

When the townsfolk realize that Tom Bates is back, the stories follow too, and the gossip snowballs until it finally lands on poor Mary. The film follows her through the stages of grief, and her journey to discover the truth behind her birth. Her understanding is that she is a Hagen, born and raised. Tom’s understanding is that it is impossible that he could be the father. Although he denies the idea that he is her parent, he is one of two people in town to stand up for her. The other: her teacher Ms. Julia Kane, played with a dignified and compassionate performance from Lois Maxwell (the role that earned her a well-deserved Golden Globe). Every time Mary finds herself at the receiving end of abuse by her peers, Tom and Julia are there as her protective advocates.

“The Court of Public Opinion” is not a new concept, but seeing the immediacy and danger it poses in the film cannot help but remind you of the current social climate (an importance it arguably did not have when it was initially released). Once a mob gets a hold of a rumor, it becomes their truth (not to be confused with the truth). When group-thinkers identify exceptional or even earnest qualities in an individual, they begin to target and persecute the virtuous. The actions and qualities that receive the most scrutiny adapt with the ever-changing societal norms and customs, but the deeper behavior is always the same. The film’s age actually helps it in this regard.

What better way to understand the facts of the world today, than to experience a story in the past or an alternate history? 2019 saw the benefits of this technique mined to great clarity and success with Once Upon a Time… In Hollywood, Joker, and HBO’s series, Watchmen. But as enjoyable as the film is for its pertinent themes, it becomes even more fun for its occasions of unintentional comedy. The ranking of the best of these moments in descending order:

5. Our guy, Ron’s pickup line: “Maybe we could have a cup of tea together. I’ve always wanted to keep a teacher after school.”

4. Locker room talk: “A girl can’t just run off to Chicago without sumthin’ happenin’ to her.”

3. The school board shaming Shirley Temple for being kissed against her will by a boy at the school dance.

2. That same boy being on the receiving end of: “Have you ever had your face pushed in, Dewey, or have you always looked like that?”

1. When it’s presumed that a girl from the high school has drowned herself, Ron’s guy drops this bit of wisdom: “Gonna have a baby, I suppose.”

Once you get past the way these moments take your out of the film’s world, it’s worth being reminded that is unfair (perhaps even unethical) to judge 1947 with a 2020, “Monday morning quarter-backing” attitude. These moments should not be flagged as a means of patting oneself on the back for how much more we know now. Rather for allowing the audience to reflect on these past norms in a humorous manner (put another way, that’s comedy). Laughter is the best medicine, and it helps remind us that ideas and tensions adapt and change over time, and things that did not upset us back then may upset us now. Likewise, things that put us in a state of unease will eventually cease to hold power over us.

For most of the film, Tom tries to get to know Mary Hagen through the intermediary of Ms. Kane. Then comes a point when he becomes fed up with the deceit and back channel communication, and decides to do things his own rebellious way: by spending time with her and Ms. Kane in a (once again unintentionally comedic) “Life is grand!” montage. When Tom takes an interest in her life, he comes to care about Mary in a way he did not expect to. As sentimental as that sounds, I would be misleading you to say that the film is black and white on this matter. The ending of the film is problematic from a writing perspective, and it makes you wonder if the filmmakers always intended to end it on the note they did, or if the casting of their leads took it down a different path. Having Ronald Reagan and Shirley Temple headline your film creates a certain expectation the audience has for their characters. Despite the complexity of the material, it isn’t out of the question to assume that Warner Brothers maybe did some reworking of the screenplay to protect their stars’ relationship to the audience.

The style that Peter Godfrey imbues with his direction of the film is in a lot of ways ahead of its time. He moves the camera deftly in interesting places, and pushes in on pivotal moments in these characters’ lives. What seems to work against Godfrey here is the editing. There is some film-school elitism in what there is to be said on this matter, but please hear me out. To show the passage of time, the film fades out of the current scene, and into the next. The fades give the film a whimsical/fantastic quality that seems to undercut the darkness beneath the surface of it all. The responsibility of the guardian to foster a child’s growth, the emotional oppression that comes with the mob mentality; these are troubles that will never go away, and while petty this criticism may be, it is worth mentioning because of how involving the film ultimately is. The sense of place is strong in this film, and you come to understand the status quo of Jordan, OH in a deep way. You only long for modern film techniques because you  only want to enjoy the immersion more consistently.

The thing that most admirable and appreciating about the film is its optimism. Whenever Mary’s peers victimize her for “the crime of being born,” Tom is there to show that there are those who care about her, and wish to see her succeed. While Tom is mostly aloof of the positive effect he has on young Mary’s life, when he does come to see things as they are, he rises to the occasion and stands up for her justice, not his own. For Tom to take the path of least resistance, is to allow Mary’s character to suffer because of his past and not because of her own decision making. While he may deny his parentage to her, he does not deny his moral obligation to her truth, and justice as a larger concept. Knowing that Reagan would go on to be president and Shirley would become a UN ambassador gives the film a “greatness from small beginnings” quality that makes it, dare I say, historic.

This film is about two just people trying to do right by themselves and each other; which doubles as an apt description for the people playing them. If we remind ourselves of the fact that most people fit that description, it is hard to be become frustrated by those who choose not to understand others. If we come to terms with that reality, it is hard to be bothered by the baseless opinions of those who do not share our sentiments. If Ronald Reagan and Shirley Temple had forgotten about that fact, how would their destinies change? We can go in circles and not come up with a definitive answer to that question. But until we do, we will have to contend to revisit the version of them, and this film, that we have now.

The Loyal Legacy of Bond: Skyfall

There are 4 comments for this article